skip to main | skip to sidebar


Ok, went over the top of the changing table.

I found a place for hair stuff - a couple of weeks ago I bought an over door CD/DVD holder, and it's not full, so put the hair stuff in a little plastic bin on one of the bottom shelves.  So that's handled, sort of.  Still not sure where to keep the iron.

But off the top of the changing table, I did manage to clear a bunch. 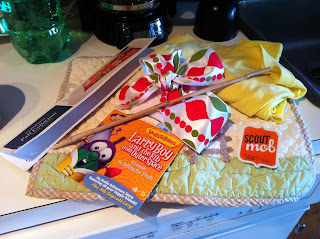 From the left, that's a piece of cardboard, a nice ribbon, a stained yellow tank top that is not mine, a sticker, a CD that we've never listened to that was a toy inside some sort of happy meal, a stick that has been in the house for about two weeks, and under it all there is a super cute pillow cover that is stained, and the stain won't come out despite repeated treatments.

The only bad thing is I put mod tot this in the trash, but then took it out to photograph it.  And I couldn't part with the cute ribbon.  Sigh.   So 6 things total today.

Posted by AwwwTrouble at 12:06 PM No comments:

Aha - slowly getting things out of the blasted changing table. 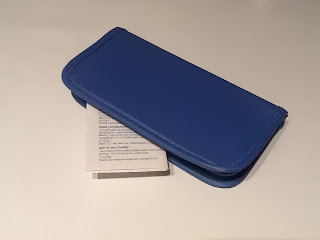 Ugh what do normal uncluttered people do with these?

Here's a great example of a problem - stuff you get that is perfectly fine but not needed. 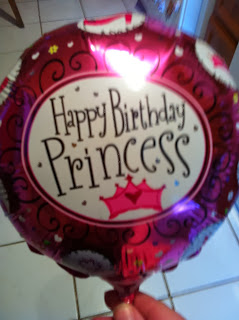 Her birthday was in September.  This was a lovely balloon that accompanied presents (and actually there is a second balloon currently under the couch).  So, nearly two months later, am I supposed to kill this perfectly fine balloon and trash it?  If no, what the heck do I do with it?

This is the kind of stuff that paralyzes me.

I get a lot of catalogs and magazines in the mail.  Magazines are suffering from declining subscriptions, but I still like to hold something tangible and glossy in my hands.  So last year, when I ran across a raft of special subscriptions at $2-5 each, I snagged them.  So the magazines pile up.  And yes, I know all about stopping catalogs, but here's my dirty little non-environmental secret: I like catalogs.  I like flicking through the pages and seeing full size images of things that I may never buy, but are visually appealing.  I simply like them and I'm not apologetic.  But, I do not like discarding them - instead, I discovered that teachers of the younger grades like them for students to practice cutting and pasting (the physical version) pictures and words.  So I do big dumps every once in a while.

The stack of magazines and catalogs by the front door reached well over 2 feet - I missed dumping them off at school before the end of the school year and then they piled up more over the summer.  So this week I've done three bags to school.

Sadly I keep forgetting to take the last bag from the car into the school for the past few days, so I'm not done yet, but still it's nice to not have that stack by the door.  Though with holidays rapidly approaching they'll pile up soon enough again! 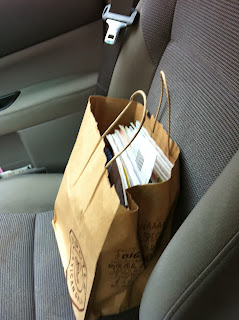 Well, I've gotten one stack of papers thrown out. I am actually looking for something Elizabeth wrote to put on awwwtrouble, so started on the papers on top of the changing table. Didn't find what I was looking for, but I did find about half on there could be discarded. I guess my inch high stack only counts as one thing, though.
Declutter 2013:
Day: 5
Items gone: 2
Goal: still undecided 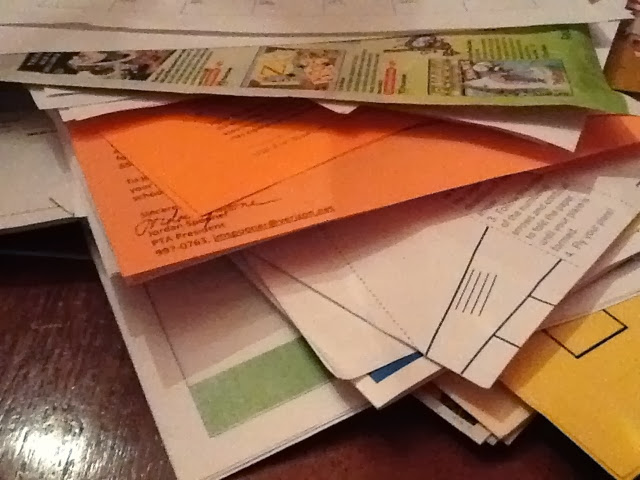 Posted by AwwwTrouble at 9:56 PM 3 comments:

Elizabeth and Andrew are wiley.  And they are very, very attached to anything that belongs to them.  So I've learned, when decluttering, to immediately take things out of the house, to the trash out back, or to hide them really, really well in the trash.

Rich however gets in a hurry and just throws things in the trash.  Then, his rookie mistake - today he asked Elizabeth to scrape her plate into the trash, which resulted in a "HEY!  What is this doing in here?"

I try, at all times, to maintain plausible deniability.  I have no idea, it wasn't me, ask Daddy.  Yep, throwing him under the bus.  That way, when I manage to grab things and push them to the bottom, I'm not a suspect.  So, sadly, nothing discarded.  Almost.

I'm writing this on Monday, having had no blogging time on Sunday.  (And eventually there will be a picture but my plan of using drobox is backfiring when Dropbox won't work properly!).

Sunday night I was mulling over AwwwClutter and thinking I need some sort of theme or goal for November.  Is this about problem areas?  I could easily just wander around and take pictures of all the clutter in the house but that doesn't actually get me anything.  And then there's still shoes, do I want to touch on my shoes at all?  Should I pick an arbitrary # of things to discard by a specific time?

Im still undecided, but as I was leaving Elizabeth's room last night (one of the top problem areas, without a doubt) I spied a toy that was broken and palmed it.  She called me back into the room and I thought she had seen my grab, but she just wanted another kiss.  So I was able to bury it in the trash in my room.  It's a small solar powered plastic thing that was a flower - under light, the flower sways back and forth.  Andrew has one, too, in his window, but Elizabeth managed to break off the flower.  So it doesn't actually do anything.  And now it is in the trash, hooray!

Of course I did spend a minute wondering if I should get a replacement but nope.  It's gone and she will never know. 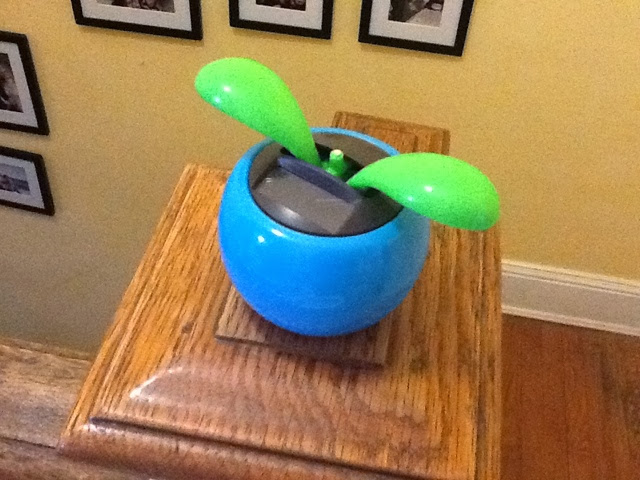 Posted by AwwwTrouble at 4:24 PM 3 comments:

Originally inspired by Stimey and the natural nesting instincts at 34 weeks of pregnancy, this was (is) my attempt to reign in the havoc and impose some order.....before it's too late.

In 2008, begun with 6 weeks to go til baby Andrew was born, I had about 50 days for decluttering. My goal then, to get rid of 6 things a day, a la Stimey's The Junk Pyramid, meant 252 things gone from the house. With a little organizing thrown in, the hope was room for a baby and visitors, and clothes, and playthings.

I decluttered over 200 things. And since then, I've toyed on and off with restarting, but keep putting it off.
2010-2011, I indulged myself with a little shoe challenge - working my way through my shoe wardrobe of over 200 pairs. Managed to get rid of a lot, but still keep acquiring shoes at a pace of 20 pairs a year.

I've also done a poorly photographed food project (courtesy of Real Simple), which might sound odd on a clutter blog, but being organized enough to have family dinner every night is a big challenge.

And now it's 2013, the clutter is overwhelming, the shoes are overflowing, and I'm back at it!

I just want to read about